One of the main draws for visitors is the fleet of Japanese warships at the bottom of the sea in Coron. Here you can find 12 well-preserved World War II wrecks at diveable depths which is pretty incredible. As mentioned, read about what other divers say about the wreaks and other dive locations at the Hub Backpackers Hangout Hostel in the center of Coron. The Irako was a Japanese refrigeration ship located at the mouth of Coron Bay.

The ship was quite large at 9723 tons, 146.9 metres in overall length and 19 meters wide. The engines,two steam powered turbines (8300 shp) driving twin propellers provided a maximum speed of 17.5 knots.

The Irako (along with the Okikawa) is debated to be best wreck dive in the Philippines. The Irako almost completely intact and has very good visibility you know yo u are on a big shipwreck. Big schools of yellow fin tuna, groupers, lion fish and scorpion fish surround this wreck. To date two permanent residents (2 sea turtles) live in the crumpled superstructure. There is also a huge column of Jacks inhabiting the bow area.

The Okikawa is a Japanese oil tanker with a displacement of 168 m long.

The Okikawa in length, width, and volume is the largest of the Coron wrecks. At this depth you may be able to make an hour-long dive.

The Okikawa Maru is voted to be the best wreck dive by half of the diver who see her so if the Irako isnt the best dive then the Okikawa! Dive both wrecks then cast your vote.This wreck covered with beautiful corals and offers a large diversity of marine-life. The deck is between 10m and 17m and is good starting place for wreck dive beginners.

The Akitsushima was a seaplane carrier with a displacement of 4724 tons, a length of 118 meters and was 15.7 meters wide. Powered by four diesel engines driving twin propellers, creating a total of 8000 shp, and producing a maximum speed of 19 knots

The Akitsushima was a large warship, now laying on her port side. She was struck by a large bomb close to the stern where the flying boat rested on the metal tracks and sank immediately. The ship was almost torn into two pieces. The flying boat disappeared upon impact.

She was a Japanese freighter carrying construction materials and building supplies for the Japanese war effort in the Pacific. The Kogyo Maru was 6353 tons, 129 meters long, and 18 meters wide. She was powered by two steam turbines (517Nhp) geared to a single shaft.

The Kogyo Maru is presently lying on her starboard side in 34 meters of water. It offers dive (swim throughs) into all six holds and through the engine room & bridge area.

The Olympia Maru was a Japanese Freighter sitting upright in approximately 30 meters of water.

The Olympia Maru had a displacement of 122 meters long and 17 meters wide, weighing 5612 tons. The ship was refitted between  June 2nd to August 2nd, 1930, with an oil two stroke six cylinder engine producing 582hp. The ship was  requisitioned by the Japanese Defence Forces during the War but was still owned by Mitsubishi Shoji Kaisha Ltd at the time of sinking.

The true name of this wreck remains unknown to this day but it’s a freighter 137 meters long, lying on its starboard side.

This is a beautiful wreck site where you can observe all kinds of diverse sea life everything from  groupers, sweetlips, scorpion fish, trumpet fish and occasionally turtles and sea snakes. Hard corals cover the port side, which is up to 16 meters below the surface.

The East Tangat Gunboat was a small gunboat or submarine hunter 40 meters long on the coral reef on the east side of Tangat Island.

The East Tangat Gunboat dive site is good for wreck diving beginners snorkelers and underwater photographers. It’s also a lovely spacer  dive between deeper wreck sites. The wreck starts at only 3 meters down so even snorkelers can see the shape and explore the bow of the ship. 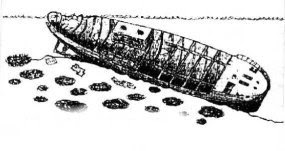 The Lusong Gunboat wreck, like the East Tangat wreck,  was also a gunboat or submarine hunter. The stern breaks the surface at low tide and is located  in front of the east side of Lusong Island.

The Lusong Gunboat wreck is great for snorkeling. It is nicely covered with hard corals and offers a huge variety of aquatic life. There are good opportunities for wreck photographers and this dive is good as a “dive between dives.” This wreck is the keel, ribs and stringers of a steel-hulled boat about 25 meters long. Not much to see when you have been diving with “The Big Boys (wrecks) ” It’s on most of the island hopping and snorkeling tours so expect crowds. its located on the Northwest corner of Coron Island

This wreck was beached with the bow 12 meters from Coron Island. The stern points away from the island. The wreck’s 5 meters deep at the bow to 22 meters at the stern. A pass through on the starboard side of the hull at 14 meters allows you to swim from the inside of the boat out over the coral reef.

The Kyokuzan Maru was a Japanese freighter approximately 160-180 meters long. it’s location is Northeast of Busuanga Island. The easiest way to dive this wreck is a one hour van ride to the north end of Busuanga then transferring to a rented dive boat. This is done as an all-day trip for two dives on the Kyokuzan Maru or maybe better for an  extended stay of a couple days.

This wreck is a beautiful dive. Mainly intact, this sunken ship usually offers great visibility of about 20 meters and ideal diving conditions. Japanese staff cars and trucks can still  be found in the cargo rooms.

BOOK A DIVE BOOK A TOUR